It’s been awhile. I started this blog looking forward to running my first marathon and working through my first semester at Baldwin Wallace. So much has happened in the past few months, and it’s past time for an update.

My dad was diagnosed with lung cancer in late 2018, and began treatment at the beginning of this year. At first, things were going well. He came through the first few treatments with few side effects. But as time went on, and chemo drugs built up and played havoc with his MS, which he had had for years, his body became weaker. More time was spent in hospitals and rehab centers, and my mom became a full time caretaker as well. His health declined throughout the month of May, and on June 17, my dad passed away at the age of 68. He would have been 69 on December 4.

All of this seemed to happen so quickly. Within a week, our house was filled with family, a funeral planned and carried out, stories and memories shared over food and drinks.

But life moved on, even though it seemed as though it shouldn’t somehow. Our out-of-town family members went home, though of course they have continued to call and offered so much support. I am blessed with a close knit family, both far and near.

Eventually I had to return to work, and as I was already enrolled for 7 credit hours worth of summer classes as well, the summer months went by in a blur. I somehow passed both of my classes with A’s. The marathon training, however, had ground to a halt. I had managed to keep my grades up while working full time, but I just didn’t have a drop of energy or time left for training. It saddened me to have to let it go, but something had to give, and it couldn’t be work or school.

Near the end of the summer, more bad news hit our family. My Uncle Paul, who lives in Kansas and been here with my Aunt Patty for dad’s funeral, passed away. In not quite three months’ time, both my mom and her older sister had lost their husbands.

All of this has brought up thoughts about my own mortality and that of my other family members. I started questioning my own direction in life, wishing I’d made different choices and wondering what the next steps should be. I’ve been depressed, I’ve been angry, I’ve been emotional. I’ve had anxiety. I keep pushing through because I know life has to go on, but I still sometimes feel like a runaway train. One of the main anchors to my life, one of the people who kept me grounded, is no longer here, and that is something I may never get used to. Sometimes I feel like a feather in the wind, to borrow an image from Forrest Gump. Floating along with no particular direction.

I’m still doing my best in school. I recently picked up a new job that will fit my school schedule and eventually offer opportunity for advancement, and I’m grateful for that. I guess that is kind of a direction after all. And I haven’t given up on the marathon yet! I just recently started working my way back into running, and I still hope to be able to check that marathon off my bucket list. I know would never forgive myself if I let it go.

So while life has moved on, sometimes without my full presence, I admit, it will never be just as was. There will be an empty seat this Christmas that no one else will ever fill, and we will do our best to remember the happy times and maybe even try to create new ones. I will be back to blogging, creating new plans for a new and very different year.

Wishing you all a blessed week, and you’ll be hearing from me soon. Thanks for sticking with me! 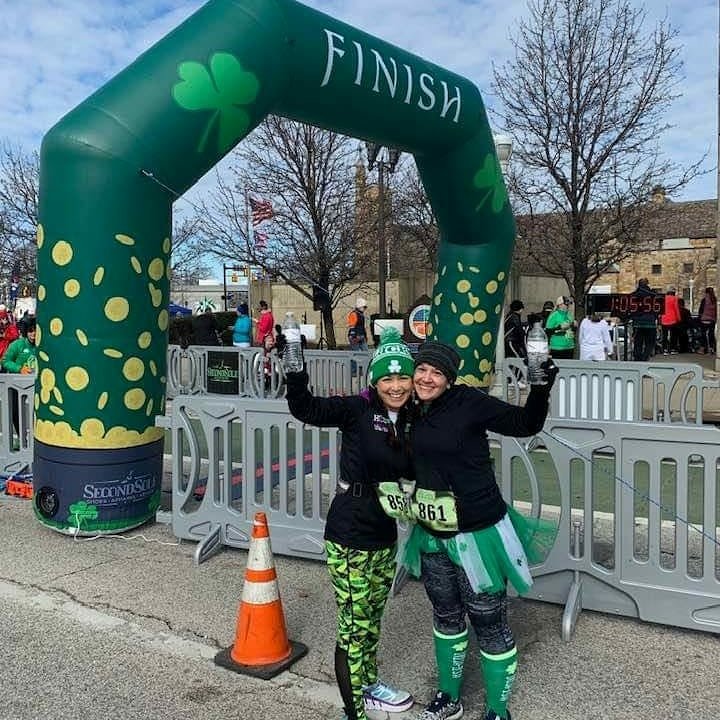 I’ve always admired marathoners. The idea of going out and running 26.2 miles- on purpose, no less- seemed like the ultimate accomplishment. When Oprah went out the year she turned 40 and ran Chicago, I was like yes! That is badass!

I started running in my mid-twenties (excluding a less than stellar season of cross country in the 8th grade.) Over the years, two of my cousins completed their own marathons, so I figured I had at least a shot at it….maybe it’s in our genes, right? But in roughly fifteen years of running, I’ve done mostly 5k races, five miles, and my longest race, one half marathon in 2013.

I finally signed up for the Columbus Marathon in 2016. It’s reputed to be a great course for a first-timer- not too hilly- and very well organized. I was ready! I signed up in February. The race was in October. Plenty of time! I ordered the training t-shirt and told all my friends this was the year. I started a training plan that was pretty intense, but I figured that’s what you had to do– step it up quick.

A month or two later, I found myself in a boot with a tibial stress fracture. I was told there wouldn’t be time to prepare for a marathon by the time my leg fully healed. I was devastated. I sold my bib to a friend of a friend and spent weeks moping about how I blew it.

Fast forward to January of this year. I hadn’t run in months, and when I did it was rarely more than three miles. I was in a major slump. I described this to one of my running friends over lunch one day and her advice surprised me.

Sign up for Columbus this year, she said. You have plenty of time to build a base and prepare. You can do it! We looked up the race online. Turns out this is the 40th anniversary of the marathon. It’s also my 40th year on this earth. Just like it was Oprah’s 40th year when she ran her marathon. 40-40-40. Trifecta. I took it as a sign.

It didn’t hurt that my cousin ran the Boston Marathon this year for the first time. Her success inspired me to keep trying. I signed up for Columbus and was given access to the Run Coach app on my phone, which gives me my training plan day by day so I can get in shape the right way…at my own pace, building up slowly to avoid injuries.

It hasn’t been easy. I’ve missed some workouts. I’ve struggled with some. I’ve had days when I was ready to quit. But my running friends simply won’t allow it. I message them when things are bad, and they talk me through it. I know they won’t let me fail.

I’ll probably still have doubts about this until the race actually gets here. Some days I’m excited about it, others I’m terrified. I have no idea if I can actually pull this off. I just know that I have to try. If I only do one full marathon in my lifetime, it will be enough to know that I accomplished a dream.

Besides, I’ve already decided on a commemorative tattoo. 😉

*In honor of Taylor Ceepo, who sadly passed away during the Cleveland Marathon last week. Rest in peace Taylor. Love and prayers to the Ceepo family. ❤

Hi everyone! So I decided to start a blog because it seems like I usually have a million ideas in my head and since I hope to be a writer someday, I hope this will be a good venue to express those thoughts and get some practice at the same time.

I’m that girl who always had her nose in a book. I grew up in the 80’s and 90’s and read everything from Beverly Cleary to Anne of Green Gables (one of my all time favorite series) to The Baby-Sitters Club and Sweet Valley High. One day I would be Harriet the Spy and run around with a notebook writing down what everyone was doing. Another I was Anne Shirley, naming all the trees and flowers in our backyard. After reading Little Women, I wanted to be Jo March and stay up late scribbling adventures.

After graduating high school, I went to college to pursue a degree in journalism. After my first year, though, something just felt off. I was no longer sure of my path and decided to take a year off. One year became many, and while I did continue to take classes at community college over the years, I never seemed to be on a straight path. I changed majors from business to medical assisting to physical therapy assisting, all of which were “practical” and likely to help me land a good job, but none of which felt like a good fit for me.

In between these majors I also moved from Cleveland to New Orleans, encountered Hurricane Katrina, relocated to Dallas and eventually the coast of North Carolina. I made some good friends along the way, but I was searching for something that ultimately had been hiding under my nose to begin with.

In 2012 I came home to Cleveland and haven’t looked back. I went back to Cuyahoga Community College and decided to pursue what I should have done all those years ago: writing. I finished my Associate of Arts last year and now I’m pursuing a B.A. in Creative Writing from Baldwin Wallace University, which I had overlooked after high school since it was in my hometown of Berea and I wanted to get away. The funny thing is, I value it so much more now for just that reason; it’s home.

All my experiences in other places ultimately gave me a greater appreciation for my own hometown. In the long run, I’m sure some of my experiences will become fodder for my writing. In the meantime, I have a new goal: to pursue writing as a career in some form. I am still exploring the many options thereof, and I’m excited to see where this new road leads. What I know for sure is that I am finally on the right path, and I am so very grateful to have found it.

This blog will follow my journey in whatever forms it may take. You can expect posts on anything from books to Indians games to marathon training (another new adventure of mine). You may find posts on global warming, education, or history. My interests are many and varied!

Thank you for taking the time to read my random ramblings. Feel free to comment, keeping in mind I’m new to the blogging world 😉 Have a great weekend!

Thanks for joining me!